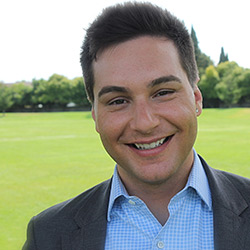 Advocacy: Became a mental health advocate and clinician to help others with similar challenges

“Helping others keeps me on my toes. I can’t talk about, ‘Hey, you should not give into your obsessions’ and then turn around and give into them myself.”

As a child, Chris Trondsen’s battles with body dysmorphic disorder (BDD) overshadowed those created by his obsessive-compulsive disorder. As early as age 7, he began hyper-focusing on aspects of his appearance that he thought were abnormal and flawed. By high school, his preoccupation with his body image – along with depression – led to the use of alcohol and drugs as a form of self-medication.  During his senior year, Chris‘ OCD really took hold, exhibited by an obsession with cleanliness and a fear of severe illness from contamination. After he later moved out of his home, the OCD became worse, causing Chris to drop out of college, leave his job, and isolate himself from friends and family. He found himself spending nearly 16 hours a day on compulsions.  Chris didn’t know he had OCD until running across a teen magazine article about the disorder. With his mother’s help, he ultimately found help, working with a therapist who also diagnosed him with, and treated him for, BDD.

Chris recalls a girl who was leaving treatment as he was beginning his, and how her encouragement helped him through the ensuing therapy. He, in turn, decided to do the same for others. He joined an online support group to encourage others, reaching out to individuals and families impacted by OCD. He also returned to clinics where he had been treated, speaking to therapy groups. He then joined the International OCD Foundation (IOCDF) speakers bureau and began speaking to treatment centers throughout the country. Additionally, Chris started sharing his story through the media, appearing on such programs as the Montel Williams Show and Dr. Drew’s TV show. He went on to become Vice President of OCD Southern California, an official affiliate of the IOCDF, while also serving the national organization in a variety of capacities.

In addition to being an advocate, Chris decided he wanted to become a therapist to help provide treatment for others experiencing challenges similar to his own: OCD and related disorders, anxiety disorders, and mood disorders, like depression. He went back to college and, in 2010, began working with the Gateway Institute for OCD and related disorders. There he treats clients on an outpatient and intensive outpatient basis. He also runs support groups and has been involved with school outreach, educating teachers to look for signs that students may have OCD, in hopes of catching the disorder early.

Chris is honored to be a part of A2A and is inspired by the stories of others who are turning adversity into advocacy. Through A2A, Chris hopes to educate the public that mental health needs to be treated with great importance if we are to make sure people feel comfortable enough to receive help and find the proper treatment.